Creating a 100% perfect native management tool is nearly impossible, and sooner or later you'll run into various issues with some part of the iOS workflow.

Every iOS developer learns a few common techniques for debugging iOS issues, and you should incorporate these into your workflow:

Any time you encounter an issue with iOS, or Xcode, your first step should be to copy and paste the error into a Google search.

Capacitor uses the standard iOS toolchain, so chances are if you run into something, many iOS developers have as well, and there's a solution out there.

It could be as simple as updating a dependency, running clean, or removing Derived Data.

Cleaning and rebuilding can fix a number of build issues. Navigate to Product -> Clean Build Folder in the Xcode menu to clean your current build.

To do this, open Xcode Preferences, choose the Locations tab, and click the small arrow next to your Derived Data path: 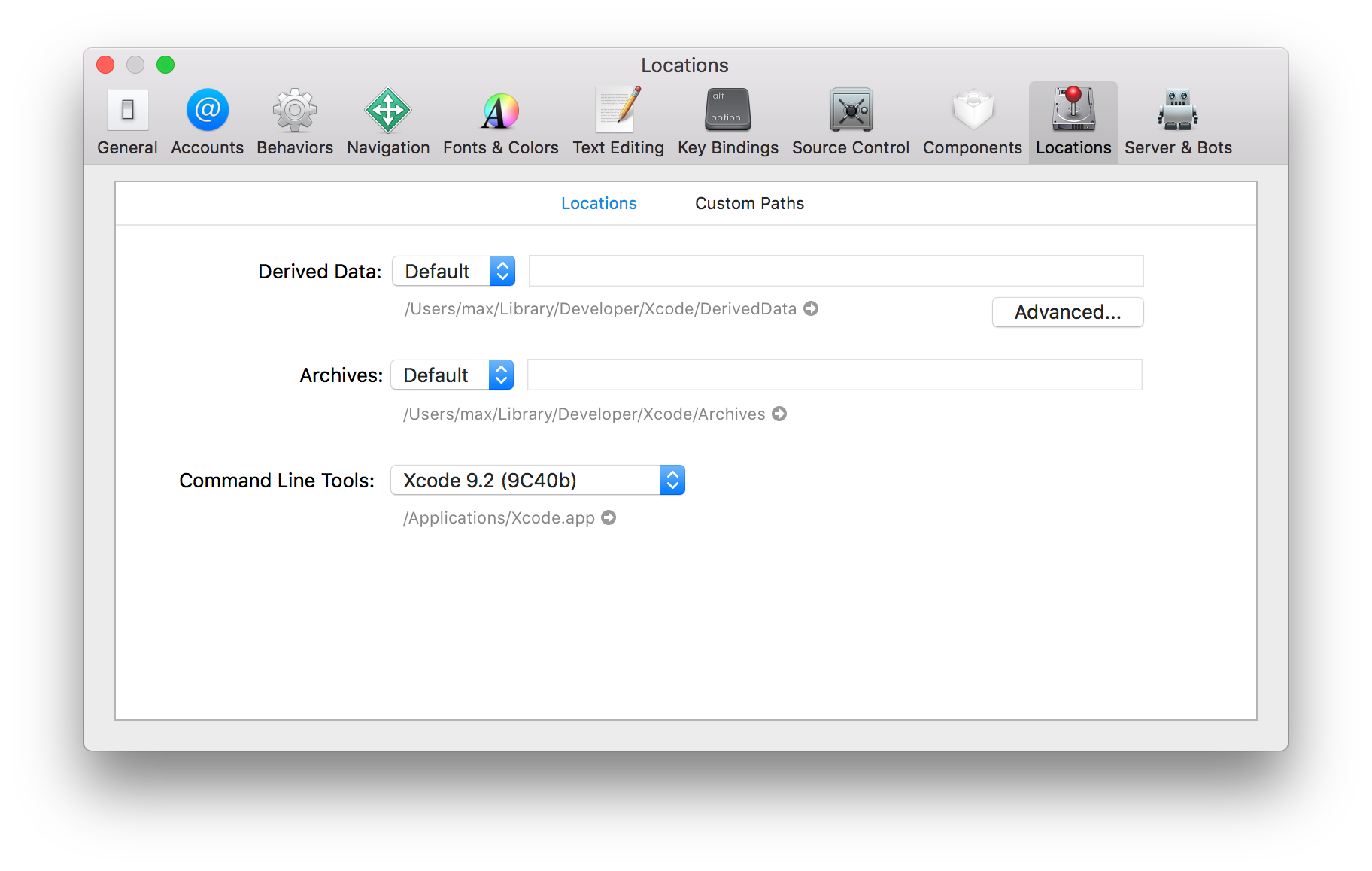 This opens a Finder window to the location of Xcode's temporary Derived Data.

Next, select all items in that directory and delete: 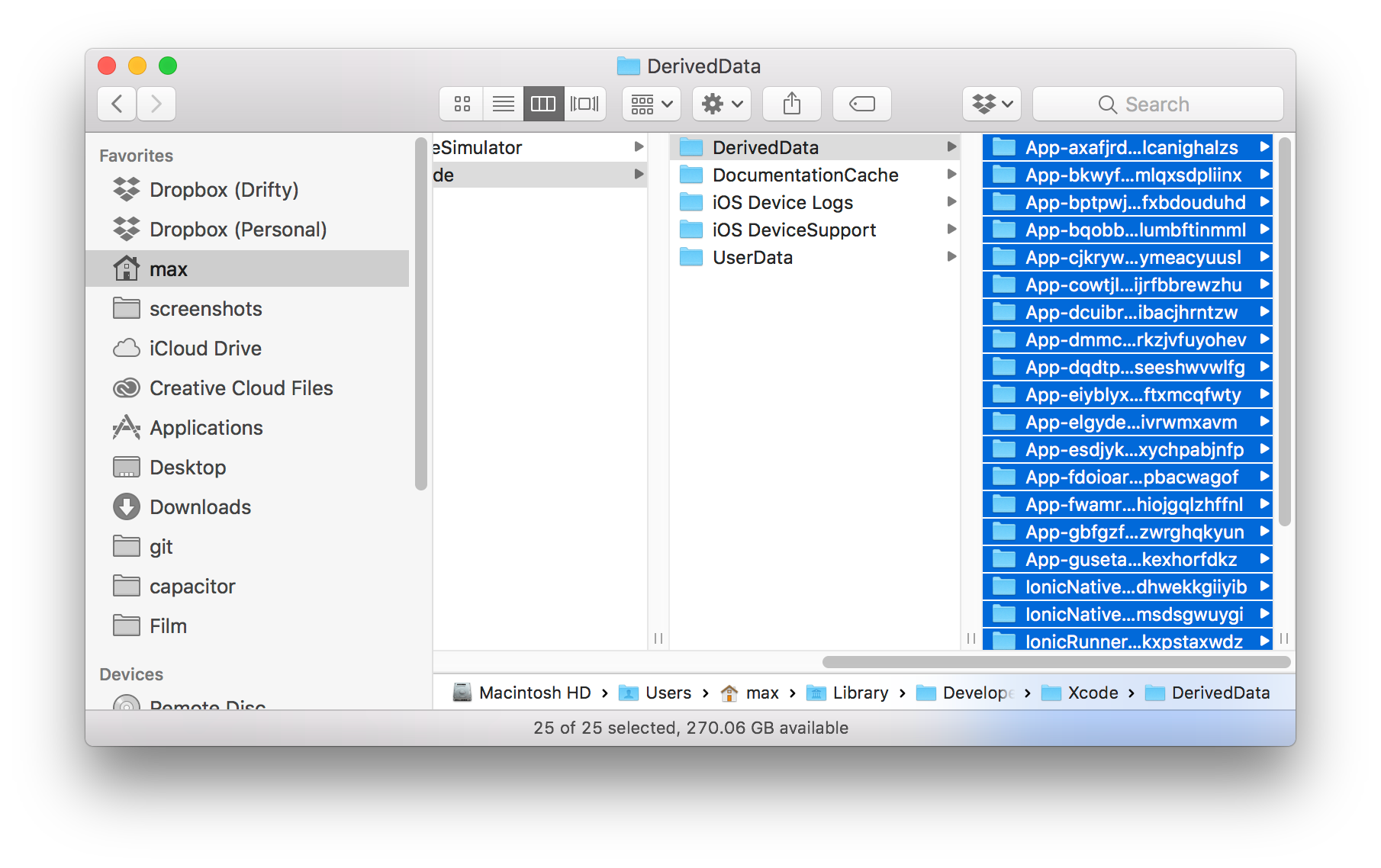 Finally, do a rebuild in Xcode.

Error: Sandbox not in sync with the Podfile.lock​

This error can happen if CocoaPods hasn't been able to run to install your dependencies.

Run this to update your pods:

Perform a new build after running this command.

Xcode sometimes gets stuck indexing forever. This unfortunate situation looks like this:

The only solution is to Force Close Xcode (using Activity Monitor) and start it up again.

If you're using an Apple Silicon-powered Mac, you might encounter something like this when running npx cap update:

This is a CocoaPods bug related to ffi not installing on M1. For now, you need to have Rosetta installed, install ffi on a x86_64 architecture and run pod install using the simulated Intel architecture for the first time.

After that, running Capacitor should work as expected.

CocoaPods: Failed to connect to GitHub​

This error can happen on Macs with an old version of openssl and ruby installed, since GitHub restricted the allowed cryptographic protocols when accessing repos.

The solution is to update openssl and update Ruby:

Finally, make sure your PATH environment variable does not put /usr/local/bin after $PATH, but rather before it.

See this StackOverflow issue for other possible solutions to this problem.

On iOS, this can happen if Capacitor doesn't find the plugins or can't inject its code into the WebView.

First of all, make sure the plugin is installed and appears in the package.json.

Finally, check that the plugin is in ios/App/Podfile. If the plugin is not listed, make sure your Podfile looks like this one and run npx cap sync again.

If still getting the "Plugin not implemented" error, make sure you don't have WKAppBoundDomains key in ios/App/App/Info.plist, that prevents Capacitor's and Plugins code from injecting. Remove the key if not needed, or if it can't be removed, add limitsNavigationsToAppBoundDomains to your capacitor config file with true value inside the ios object.