Capacitor has three officially supported application targets: Android, iOS, and Web. In order to create applications for all three platforms, you'll need to install all of the following dependencies. If you are not targeting one of the native mobile targets, you can skip the associated section.

Do you need to support Desktops? You can use Capacitor to build Windows or Electron apps as well!

In order to develop any application with Capacitor, you will need NodeJS 14 or higher installed. You can install Node by using the installer on the Node website, using Volta: a JavaScript tools manager, or installing it with a package manager like homebrew, or Chocolatey.

Once you have installed Node, open your terminal of choice and type in the following command to make sure node is properly installed

With Node installed, you can get started with creating Progressive Web Applications (PWA) with Capacitor.

To build iOS apps, you will need macOS. While there are solutions like Ionic Appflow that be used to perform iOS cloud builds if you don't have a Mac, it is highly recommended to have the tools available to you locally in order to properly test your Capacitor application.

Once you've installed the core requirements, as well as Xcode, Xcode Command Line Tools, and Cocoapods, you'll be able to create both iOS applications and PWAs.

Xcode is Apple's IDE for creating native macOS, iOS, and iPadOS applications. You can install Xcode by using the Apple App Store on your Mac. Capacitor 4 requires a minimum of Xcode 13.

The Xcode command line tools are additional tools not included with the core of Xcode that are required for building and testing your application. Once Xcode has been installed, you can install the Xcode Command Line Tools by running the following command in your terminal:

After inputting your password and waiting for a few minutes for the packages to install, you can verify that the tools are installed by running the following command:

Homebrew is a package manager for macOS package. You need to install it in order to install CocoaPods for both Intel and Apple Silicon Macs.

Don't just trust us! This is how brew.sh recommends installing Homebrew.

If you do not want to install Homebrew, alternative, but not recommended, instructions can be found below.

Cocoapods is an iOS dependency manager that Capacitor uses to install and manage native dependencies for your iOS project. You can install CocoaPods by running the following command in your terminal

You can verify that CocoaPods has installed correctly by running the following command.

You can install CocoaPods directly with Ruby Gem. To install it, you can run the following command.

However, installing CocoaPods this way will not work on Apple Silicon Macs. You will need to run CocoaPods through Rosetta enabled. To do this, you can run the following commands.

Then, whenever you want to update your application to use a newer version of your web code, you will need to run the following commands.

You do not need to separately install the Java Development Kit (JDK). Android Studio will automatically install the proper JDK for you.

Once you've installed the core requirements, as well as an Android SDK with Android Studio, you'll be able to create both Android applications and PWAs.

Once Android Studio has been installed, you need to install an Android SDK package.

In Android Studio, open Tools -> SDK Manager from the menu and install the platform versions you'd like to test with in the SDK Platforms tab: 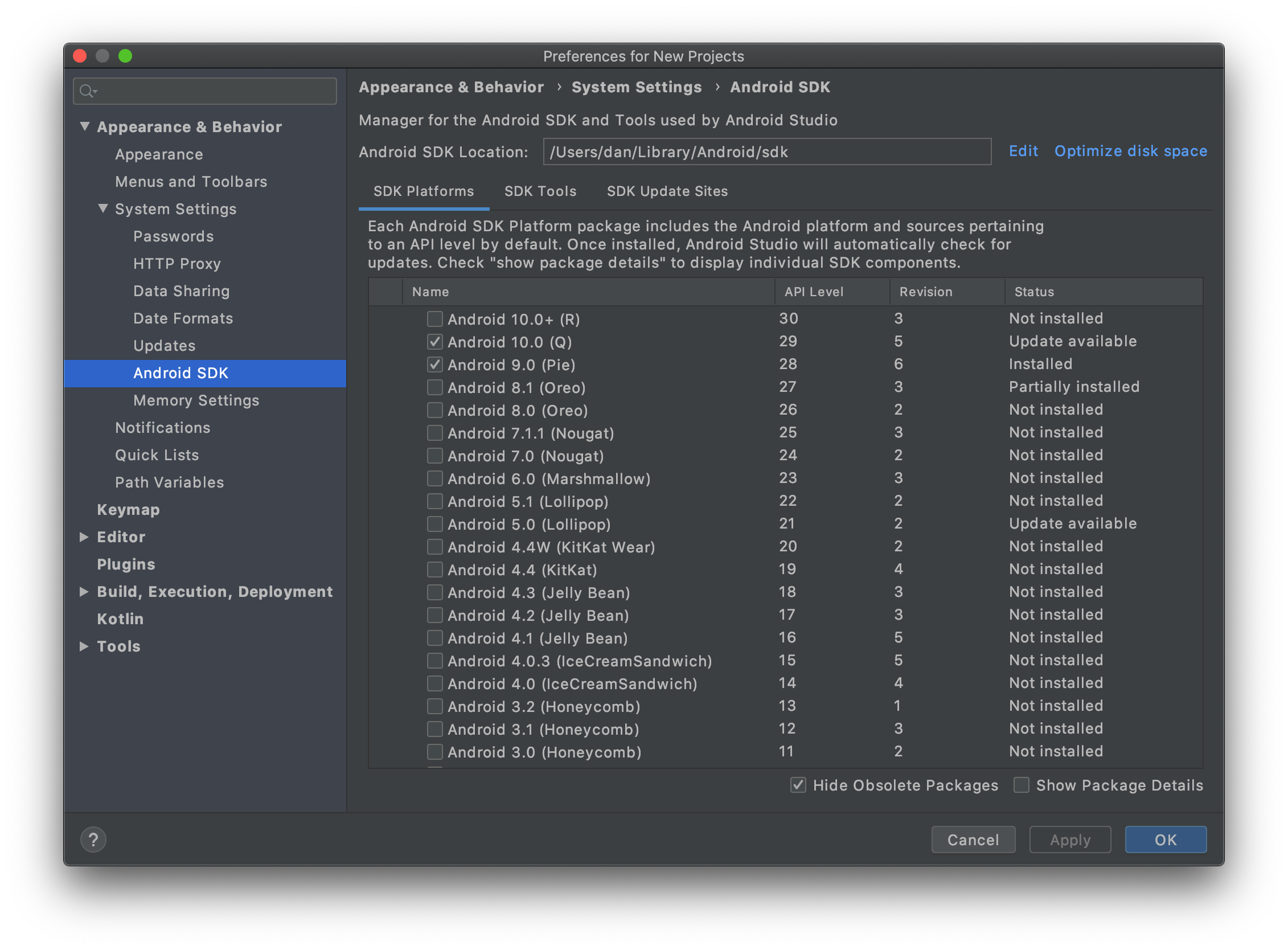